Known as the Garden Isle, it’s only natural for Kauai to be home to innovative agricultural projects that are incorporating renewable energy. And with a background as a solar contractor and a knack for gardening, it also makes sense for Dylan DePue of Kalaheo. Growing up in Northern California with a three-acre home garden, Dylan said, “I’ve always had a green thumb, I’ve always loved growing stuff.”

He got into the solar business and saw the potential to combine renewable energy with agriculture when he helped to install a solar-and-battery system for a Kauai Community College aquaponics project. “When I started learning about what they were doing at KCC, I thought, ‘hey I could do this.’

Shortly thereafter, Dylan bought a property in Kalaheo and built his own aquaponics system with solar and batteries. Now, along with his partner Kirsti Vedenoja, he’s working on a larger system on Omao Ranch Lands that produces four varieties of lettuce being sold to island restaurants and hotels.

“When I started designing this [aquaponics system], you need a roof over the fish tanks no matter what, in order to not have algae growth in the fish tanks,” explained Dylan, pointing out the 20kw PV system giving shade for the tilapia that supply nutrients for the lettuce. “We made the fish ponds out of concrete so it’s a solid foundation and built trellises over it, and the solar panels act as our shade cover, so it’s dual purposes.” 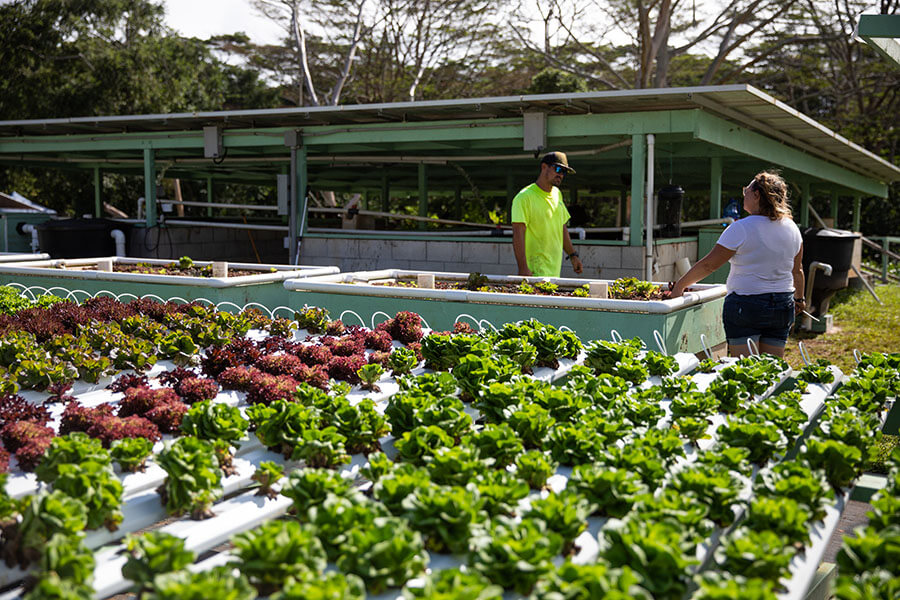 Construction is underway to install 360 total PV panels on the land to eventually provide 200kw during peak sun and 250kw of storage. But Dylan also has clean energy dreams beyond solar and batteries -- he wants to one day open an electric vehicle dealership.